An LED light module, also known as a light-emitting diode module, is a type of LED device that can either function independently or be powered by plugging it into a suitable unit. One or more LED emitters are frequently contained in a board fixture that powers the LED lights or plugs into a unit that powers the LED module. LED modules, also known as LED arrays, are basic LED assemblies. They make use of one or more diodes that are organized on a circuit board. The LED circuit board is made up of PCB and PCB (printed circuit boards are made up of material designed to improve heat dissipation.

In short, one or more LEDs may have additional components, for example, optical, mechanical, electrical, and electronic, but excluding the control gear. The Government of Indian and the BIS Bureau of Indian Standards have made it compulsory to register under BIS registration under a compulsory registration scheme. It is compulsory for both domestic as well as foreign manufacturers to register their standalone LED modules for general lighting as per IS 16103.

Here’s the 4 pillars on which BIS Licence depends, without these no applicant can apply for Indian BIS Certification. In order to get BIS Registration, applicant must fulfill following requirements:

A) Process for Foreign Manufacturer

Guidelines for the nomination of Authorized Indian Representative (AIR)

It is mandatory for the foreign applicants to nominate Authorized Indian Representative (AIR) for its operations in India to get BIS Bureau of Indian Standards Certificate. In case they don’t have branch office in India. AIR as a local representative is responsible to submit and manage the application for certification and is available to answer the questions. Following guidelines to be followed by Foreign Manufacturer to appoint the Authorized Indian Representative (AIR)

B) process For Domestic Manufacturer

HOW THE BUREAU WORK

From Legal compliance to Product Testing, From Training to Research, From Development to complete conformity assessment, Aleph INDIA is a single window solution for all kind of product certification needs. 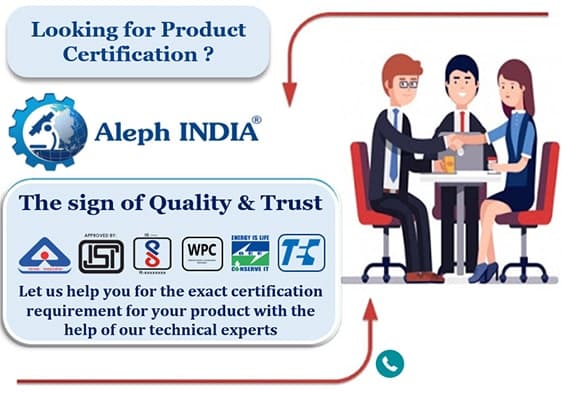